The user acceptance testing was conducted once the ePiSaT Software was released to the public via github. Each tester was selected for their specialist expertise, thus representing a range of potential users. Firstly, Associate Professor Lindsay Hutley from Charles Darwin University was selected because he provided flux tower data to the project and he understands the ‘flux data’. Secondly, Dr Siddeswara Guru from Queensland University was selected because he understands data processing and software. The reviewers were provided the github repository URL, and the documentation and asked to test if the system was capable of perform as described.

The key outcome is that both reviewers concluded that the package performs as expected and commended it as a positive contribution to the community.  Following are the 2 reviewers complete responses;

Thank you for allowing me to review your ePiSaT system.

I have followed simple instructions as provided and looked at your blog that hosts the system.

As novice user to this system, I was able, with no major problems to download and use the test flux data and run the these data through the R scripts.

The system / model appears to be robust and uses the latest gridded climate data and fPAR/GPP products for Australia. Functions as detailed are all standard versions as described in the literature.

I was able to generate 30 minute partitioned GPP and Re that appeared to me to be reasonable and in-line with previous efforts to partition flux data in savanna at a plot scale – your product we have the capability at biome and continental scales.

I could see some savanna specific improvements that could be made (e.g. see the LUE and GPP models of Kannihar et al) but this system is focused on partitioning fluxes but in my view it is relatively user-friendly, well documented and has provided credible outputs. Key variables outputted from the model (Amax, quantum efficiency, respiration etc) are in line with previous efforts to partition this data.

Congratulations on a very useful tool, there are numerous methods to partition flux data and this is a product pitched at integrating current OzFlux data and spatially extrapolate this over space and time, a hugely useful outcome. For a ‘flux ecologist’ like myself GPP and respiration data can now be compared with site values, compared to other models, integrated with maps of fire, soil types, climate envelopes to further unpack spatial and temporal patterns of carbon cycling in savanna.


A selected quote from S.M.Guru;

"I was able to conduct the user acceptance testing on the ePiSaT product ... The plotting functionality is also impressive. Good luck with the software release and there is a huge potential for the product."

For more information visit the ANDS website ands.org.au and Research Data Australia services.ands.org.au.
Posted by Brad Evans at 6:29 AM 33 comments:

The ePiSaT software has been released. The code and sample OzFlux data can be downloaded from:

The package and code is self explanatory, enabling the user to partition flux data to generate an estimate of GPP. ePiSaT users wanting to replicate the project can download more OzFlux data directly:

Once downloaded, you can install episat using the following terminal command.R CMD INSTALL episat_1.0.tar.gzAlternatively, from an R GUI go the package manager and follow the prompts to install a package from source.


Running the software in R

Once installed, from an R command prompt, run the following code: library(episat)   ?episat # <-- for help and how to use the package.

This work is licensed under a Creative Commons Attribution 3.0 Attribution-NonCommercial- CC BY-NC

This license lets others remix, tweak, and build upon your work non-commercially, and although their new works must also acknowledge you and be non-commercial, they don't have to license their derivative works on the same terms.

EXAMPLE: You wish to use this code or data in your own work, a peer reviewed journal article, then you need to attribute the work by referencing published article listed above and/ or the DOI (i.e. for output data only).

Contact the author and maintainer if you have any questions.

Information about the carbon cycle potentially constrains the water cycle, and vice versa. Benefitting from the public liberation of the data necessary to drive carbon and water cycle models, a recent study by the authors of this blog post succesfully demonstrated the utility of multiple observation sets - such as provided by the TERN Auscover and OzFlux facilities - to constrain carbon and water fluxes and stores in a land surface model, and a resulting determination of the Australian terrestrial carbon budget. It exemplifies the joint use of data from observational facilities and infrastructure (e-MAST).

Results emerging from the multiply-constrained model are as: (1) on the Australian continent, a predominantly semi-arid region, over half (0.64±0.05) of the water loss through ET occurs through soil evaporation and bypasses plants entirely; (2) mean Australian NPP is 2200±400 TgC/y, making the NPP/precipitation ratio about the same for Australia as the global land average; (3) annually cyclic (“grassy”) vegetation and persistent (“woody”) vegetation respectively account for 0.56±0.14 and 0.43±0.14 of NPP across Australia; (4) the average interannual variability of Australia’s NEP (±180 TgC/y) is larger than Australia’s total anthropogenic greenhouse gas emissions in 2011 (149 TgCeq/y).
Posted by Brad Evans at 7:51 PM No comments:

Our goal is to use the OzFlux network micrometeorological flux measurements of carbon dioxide exchange between different Australian ecosystems (biosphere) and the atmosphere, to better understand the physical meaning of satellite data generally associated to photosynthetic capacity. The Eddy Covariance Method (EC) used at all OzFlux sites, measures Net Ecosystem Exchange (NEE) on an hourly basis. NEE can be separated on its 2 main components, Ecosystem Respiration (Re) and assimilation (photosynthesis), the latter assumed to be equivalent to Gross Ecosystem Productivity (GEP). Therefore, GEP = NEE + Re. For detailed information about the EC method see Goulden et al. (1996). 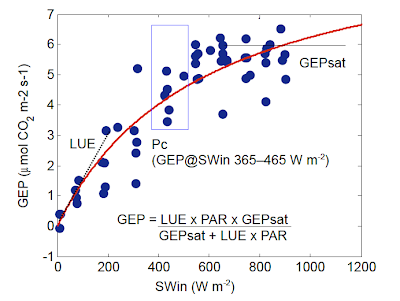 In order to harmonize and standardize the flux data we carry out the following process: (1) clean the data (e.g. remove data collected during rainfall) and remove existent outliers, (2) define a site specific turbulence threshold, as fluxes need to be corrected (removed) if measured during low turbulence periods, when the basic assumptions of the EC method are not satisfied, (3) NEE is partitioned in Re and GEP, were Re is derived from nighttime NEE (when there is no photosynthesis, GEP=0), and finally, (4) fit a rectangular hyperbola to the relationship between GEP and incoming solar radiation and using the fit to obtain different measures of ecosystem photosynthetic capacity (e.g. productivity at saturating light, GEP
sat) see Figure 1. 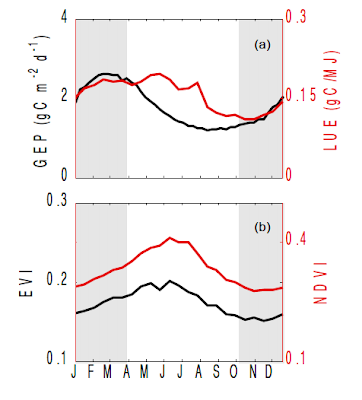 This project will deliver a hindcast and near real-time monitoring system for terrestrial Gross Primary Production by natural, semi-natural and agricultural ecosystems across the Australian continent. The new national dataset will be generated on a 0.05 ° grid and be available for download from a URL to be announced early 2013. Additionally, a set of tools, together with instructions on their use, will be provided for use under a Creative Commons Attribution 3.0 Unported License from the projects google code repository. This is an example of what the modelled output might look like. 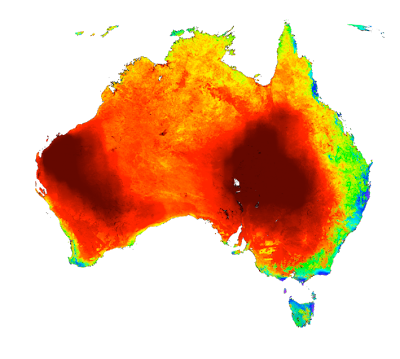 The features of our model and modelling system

The general equation of the model

Our Gross Primary Production (GPP) model design builds on the well founded and tested light use efficiency approach and incorporates recent developments in our understanding of the relationships between Carbon dioxide (CO2), Vapour Pressure Deficit, Soil Moisture and Photosynthesis. More specifically we recognise that;

The general equation behind our modelling approach can be written as follows;

Key features of the modelling system

1.     Capable of reading in a range of datasets from the TERN and Bureau of Meteorology and re-grid them as required; a.k.a. data abstraction.
2.     Be usable stand-alone, embedded in a workflow or ported to a new model core; a.k.a. modular in design.
3.     Facilitate point-to-point calibration and validation against OzFlux tower data across a range of spatial and temporal scales.
4.     Output any metadata elements in a human readable format.
5.     Written in an open source language with cross platform interoperability.

The computational requirements of this project are overshadowed by the need for usability and transparency- given our open access and source approach. As such, we identified the two most widely used open source platforms in our core user group: R-Project and Python. R was chosen by the development team given it is considered more widely used for benchmarking within our local user community, for example: PALS.

Data abstraction will be done using the Geospatial Data Abstraction Library (GDAL). In the R version, RGDAL bindings and the raster package will be used for low-level reading and writing of data and to facilitate the high-level model functions required for the model and modelling system functionality. 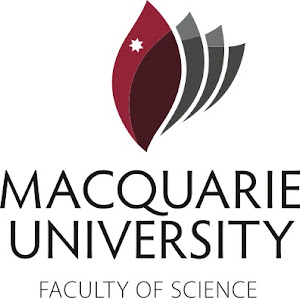